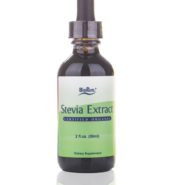 Stevia (Stevia rebaudiana) is an herb in the plant family Asteraceae. It is native to South America, but cultures all over the world have been growing and using Stevia as a sweetener and for its health benefits for centuries. The sweetness of Stevia has been measured to be as much as 300 times greater than that of regular table sugar, while it has zero calories and is a source of many nutrients, amino acids, and healthful bioactives.

The intense sweetness of this remarkable plant is due to the presence of bioactive compounds called glycosides that contain glucose sugar molecules. The most abundant glycoside in Stevia has been identified as “stevioside”, which can support normal blood sugar metabolism.* Stevia leaf extract has also been shown to have antioxidant activity due to its phenolic content.

BioPure’s Stevia is a certified organic alcohol extract of the leaf portion of the plant.  It is intended to be used as directed, and only as a dietary supplement. If you have diabetes or any other blood sugar metabolism disorder, please consult your Health Care Practitioner before using Stevia.